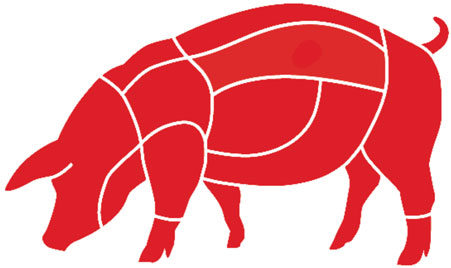 Pork neck is the front part of the back rack up to the 4th or 5th rip. It is well marbled and great for roasts, neck steaks or pulled pork. In Germany it is very popular for BBQ as marinated pork neck steak.

Pork shoulder is the top portion of the front leg of the hog. The terminology for pork shoulder can vary widely depending on the region. The upper part of the shoulder, often called the blade pork roast and is a well-marbled cut. This versatile cut can be pot-roasted whole, cut up for stews or cooked over moist smoke in a smoker to transform it into classic pulled pork barbecue. Whether it is roasted, braised, or barbecued, blade roast becomes meltingly tender and deliciously flavorful.

The pork knuckle is covered by a thick layer of fat and shows a very well marbled texture. It is very flavorful and tender but needs to be cooked for longer periods. The skin should be easily removable indifferent of the cooking method such as stewing or grilling. This is very popular across Germany as Schweinshaxe.

Pork rib roast or rack of pork originate in the rib area of the loin that runs from the pig’s hip to shoulder. It contains a bit more fat which makes it flavorful. This primal cut of the pork can be also be used for pork chops. Pork chops are the most popular cut from the pork loin. Depending on where they originate, pork chops can be found under a variety of names, including loin, rib, sirloin, top loin and blade chops.

Spareribs come from the belly of the hog and are known for their delicious, meaty pork flavor. These ribs are the least meaty variety of ribs, but full of flavor. Spareribs are typically larger and heavier than back ribs. When prepared for BBQ, Ribs are commonly prepared with either “wet” or “dry.” Ribs rubbed with a mixture of herbs and spices are called dry ribs. Such rubs can be applied just before barbecuing. Ribs basted with sauces during the barbecuing process are called wet ribs. For best results, brush ribs generously during the last 30 minutes of cooking to prevent burning. Ribs are also highly popular in Chinese cooking

Pork belly comes from a hog’s ‘belly’ or underside after the loin and spareribs have been removed. This boneless cut may be served fresh, or cured or smoked.Fresh belly is succulent and richly flavorful and is often served in small portions. Pork belly is at its best and is most tender when prepared using a slow cooking method, such as braising. Pork belly also is a popular menu item among restaurant chefs who appreciate its versatility, flavor and texture. It benefits form a slow cooking method such as braising or roasting to bring out its full potential.

Fresh pork leg, also known as fresh ham, is the uncured hind leg of the hog. The whole bone-in leg weighs between 15 and 25 pounds and includes the shank and leg bones. It consists of a variety of cuts such as topside, silverside and shank that can be used for a variety of cooking methods and dishes. The topside is great for short sautéed pieces of meat or schnitzels silverside suits itself great for roast and broiling other parts are great for schnitzel, steaks, stir-fry, stew or for cold cuts such as cooked and baked ham.